Physically punishing our dogs is not training — it is abuse! 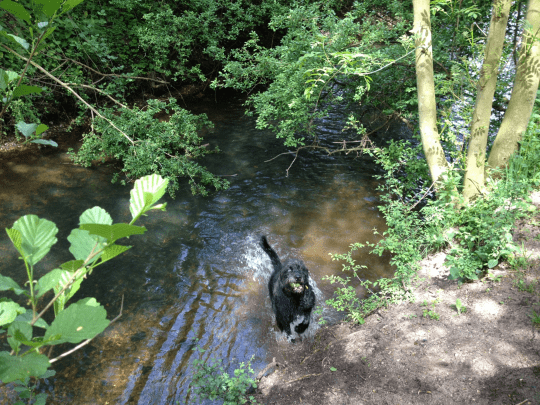 I am staggered by the number of dog owners I see that think it is acceptable to hit their dogs. (I will not be using any pictures in this post — they will be too upsetting for most caring dog owners).

I would recommend ‘How dogs learn (Burch MR et al, 1999)” as a good starting point for those interested in doing the best for their dogs.

Modern canine behaviourists and trainers adopt positive procedures to train dogs. The other end of the spectrum is the trainer who thinks ‘breaking a dog’ through physical punishment is the best way.

Frankly, I would hope that we have progressed over the past 50 years and, now take the view that physical punishment is purely just cruelty. Most of the incidents of this type of abuse are perpetrated by owners that are angry and, simply, lose it when their dogs does not do what they want. Often, they physically assault there dogs, simply because they can.

Two recent examples I have witnessed whilst out with my rescued deerhound:

a) A woman had two, lively (as is the norm for the breed), springer spaniels. In the space of a couple of minutes, this woman, clearly in a temper tantrum, struck one of the dogs, repeatedly with a leash, whilst shouting at it. Ridiculous and downright cruel.

b) A man, with two dogs behind a low garden wall — a boxer and a staffordshire bull terrier, struck both his dogs with a strap as I approached. From what I could see, their crime was to have just shown a little interest in my approaching dog. The dogs stayed behind the wall as I passed. A glance over my shoulder saw the man again strike the dogs with the strap. Why? I have no idea.

Physical punishment such as the above is simply cruel and ineffective — the dog learns nothing from such abuse, just fear of the owner.

The issue of physical punishment is, for me, clear. Sometimes the gentle jerking on a leash might be required — but that is it. Any more than that is abuse. ALL of the other examples described in 4 above, are examples of abuse. NONE of them should EVER be considered.

A dog that is cruelly treated, for whatever reason the human (wrongly) thinks it is an appropriate response, will only learn to be fearful or aggressive, or both.

I strongly recommend that, if you really are a dog lover, you do some reading. “How dogs learn” is a reasonable starting point.

A positively well trained dog is a happy dog!

Heat and dogs — give them a break Staffies – dangerous dogs?